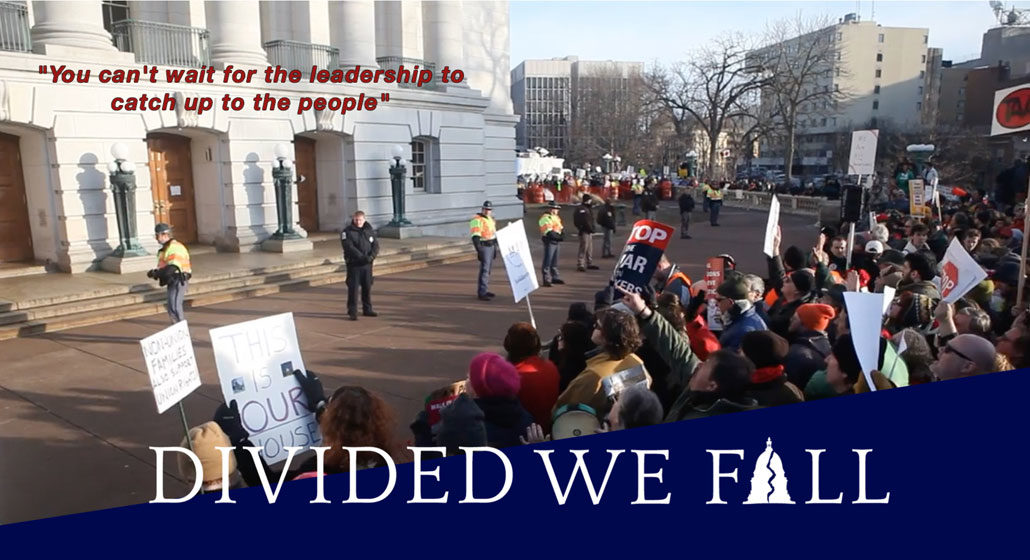 Christ Presbyterian Church, 944 E Gorham, Madison, WI; 6:30 pm.  This screening is part of a series on nonviolent direct action.  It’s free and open to the public.

At the Sundance theater in Hilldale Mall, Madison, Wisconsin.  Buy tickets in advance ONLY through Brown Paper Tickets. The Sundance will NOT be selling tickets to our film.  If you want to buy tickets at the door, you must bring cash and exact change directly to Auditorium 6 in the Sundance – where our film will be screened.  Tickets are $10 each. Filmmaker will be in attendance for Q & A!

A ten-minute clip of our film (with clips from several other films) will be screened at the Fighting Bob Fest kickoff in Madison, Wisconsin.

We got a lot of positive audience reviews after our private premiere on July 21st at Sundance Cinema.

“We cheered, booed, laughed, and cried, reliving the incredible and radicalizing experience of occupying our state capitol…”

“Absolutely spectacular. By far the best representation of the occupation and Uprising that I’ve read/seen/heard. I loved it.”

“The description of the evolving nature of the event, of the different and sometimes contradictory emotions, feelings, political philosophies and political calculation is not only very instructive but remarkably compassionate… It is sad and painful at times but not mean and angry… Thank you for a great work.”

On the lighter side: Best review from a supportive relative who is not really interested in the politics:

“I thought I would be bored. But it held my interest all the way through!”

See What Happened in Wisconsin

Scroll to top
We use cookies on our website to give you the most relevant experience by remembering your preferences and repeat visits. By clicking “Accept All”, you consent to the use of ALL the cookies. However, you may visit "Cookie Settings" to provide a controlled consent.
Cookie SettingsAccept All
Manage consent

This website uses cookies to improve your experience while you navigate through the website. Out of these, the cookies that are categorized as necessary are stored on your browser as they are essential for the working of basic functionalities of the website. We also use third-party cookies that help us analyze and understand how you use this website. These cookies will be stored in your browser only with your consent. You also have the option to opt-out of these cookies. But opting out of some of these cookies may affect your browsing experience.
Necessary Always Enabled
Necessary cookies are absolutely essential for the website to function properly. These cookies ensure basic functionalities and security features of the website, anonymously.
Functional
Functional cookies help to perform certain functionalities like sharing the content of the website on social media platforms, collect feedbacks, and other third-party features.
Performance
Performance cookies are used to understand and analyze the key performance indexes of the website which helps in delivering a better user experience for the visitors.
Analytics
Analytical cookies are used to understand how visitors interact with the website. These cookies help provide information on metrics the number of visitors, bounce rate, traffic source, etc.
Advertisement
Advertisement cookies are used to provide visitors with relevant ads and marketing campaigns. These cookies track visitors across websites and collect information to provide customized ads.
Others
Other uncategorized cookies are those that are being analyzed and have not been classified into a category as yet.
SAVE & ACCEPT